Asbestos is the cause of mesothelioma. Mesothelioma is caused by inhaling or ingesting asbestos fibers. The mineral asbestos gets its name from the Ancient Greeks. The Greeks recognized the fireproof qualities of asbestos, while recognizing the harmful effects on asbestos workers. The word asbestos means inextinguishable.

Asbestos is the generic name for six naturally occurring minerals. It is composed of silicon, oxygen, hydrogen, and several different metals. Asbestos can be divided into two basic groups, serpentine and amphibole, which differ in their physical characteristics. Serpentine asbestos develops in a layered form. Amphibole asbestos has a chain-like structure. The three most common types of fibers are chrysotile (white asbestos), amosite (brown or gray asbestos) and crocidolite (Riebeckite).

Chrysotile asbestos is a white curly fiber and accounts for 90% of asbestos in products. Chrysotile is a member of the serpentine group and is a magnesium silicate. Amosite asbestos is made up of straight fibers containing iron and magnesium. Amosite is a member of the amphibole asbestos family. Crocidolite, a member of the amphibole asbestos family, takes the form of blue, straight fibers. Crocidolite is a sodium iron magnesium silicate. The other asbestos types, all in the amphibole group, are anthophyllite, tremolite, and actinolite. Anthophyllite ranges in color from white to gray to brown. It is associated with talc and other minerals. Anthophyllite is a magnesium iron silicate hydroxide. Tremolite is a calcium, magnesium, iron silicate and is white to grayish green. Tremolite can be found in various types of schists. Schists are metamorphic rocks usually named by the main mineral from which they are formed. Bitotite mica schist, hornblende schist, garnet mica schist, and talc schist are some examples. Actinolite has a chemical formula that is similar to tremolite, but actinolite contains more iron in relation to magnesium than does tremolite. Actinolite appears as dark green crystals or fibrous aggregates.

The type of asbestos most people commonly recognize is generally made up of fiber bundles which easily separate into long, thick fibers. It was this property that first was recognized and used in ancient times for everlasting lamp wicks. In A.D. 77, Pliny the Elder published the first encyclopedia, Natural History. Pliny wrote, "Asbestos looks like alum and is completely fire-proof; it also resists all magic potions, especially those concocted by the Magi." Both Pliny and the ancient Greek geographer Strabo observed the "sickness of the lungs" in the slaves that wove asbestos into cloth.

Asbestos references can be found in texts from many different cultures throughout recorded history. Asbestos was used in very limited ways for many hundreds of years with its popularity increasing during the Industrial Revolution beginning in the late-1800's. Asbestos then began to be used as insulation for steam pipes, turbines, boilers, kilns, ovens, and other high-temperature products.

It was not until the early 1900's that knowledge regarding the dangerous propensities of asbestos began to resurface. An English physician performing a post-mortem on a man who worked with asbestos discovered asbestos fibers in the mans lungs. During the course of the next two decades, physicians noted that asbestos workers had uncommonly high levels of illness and disease. In the mid-1920's, an English doctor made what many believe was the first diagnosis of asbestosis. Soon thereafter, an English study showed that 25% of asbestos workers had signs of lung disease. England then began passing laws designed to protect English workers. 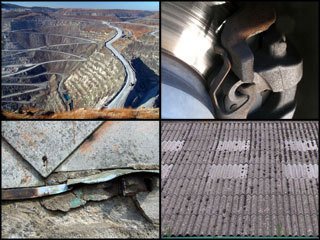 Sadly, in the United States, asbestos use increased dramatically as other properties of asbestos were recognized. For example, asbestos was used as a filler in many plastics and adhesives (glues). Asbestos was used in paper production in order to obtain a higher grade of paper with a lower grade of pulp. Immediately before and after World War II, brakes, clutches, building plasters, cements, shingles, insulation, drywall joint compounds and textured paints commonly contained asbestos. Almost any building material over 30 years of age may contain or be attached to some type of asbestos containing product.

Because of factors including the increasing human life span, better medical diagnostics and the myriad of products that have contained (or still do) contain asbestos, diagnoses of asbestos diseases are expected to increase for decades to come.

The books Outrageous Misconduct: The Asbestos Industry on Trial, written by Paul Brodeur, Pantheon Books, New York, New York, 1985, and Asbestos: Medical and Legal Aspects, 4th Edition, written by Barry I. Castleman, Aspen Law and Business, Engelwood Cliffs, New Jersey, 1996 and other sources of information show that asbestos companies had extensive knowledge that the use of asbestos in their products and by their employees would cause serious health issues for individuals in the future. The following are just a small sample of events that occurred that provided companies with knowledge that asbestos was dangerous:

As stated, the above actions by these companies are just a small sample of the many actions by companies using asbestos which did so in disregard of the safety of their employees and other innocent victims. Companies, who so frivolously ignored the health of the public and their own employees, are the targets of our litigation.